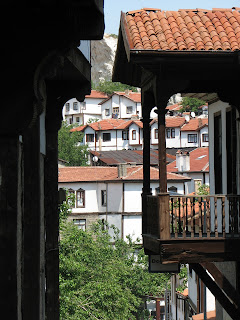 Ankara is the world's most boring city, a city of dust, ugly buildings and nothing to do, yet, 1 hour away from Ankara sits the adorable town of Beypazari, the perfect escape from the misery of Ankara. Home to carrots, silver jewelery and all sorts of spices, Beypazari makes for a great afternoon excursion.  Yadi and I frequently visit, setting out mid-morning from Ankara in search of a tasty Turkish breakfast, complete with fresh village bread, jams, honey, olives, tomatoes, cucumbers, menemen and, of course, Turkish tea. We normally finish breakfast with homemade baklava. The perfect place to go for breakfast is along the small river just outside of town where a number of little restaurants have set up home.

For those who seek to make Beypazari a full weekend excursion, Yadi and I recently stumbled upon a brand new hotel located on the hills outside Beypazari. The hotel is called "Doganbey" and it's super cute: log houses with fire places and balconies which make for a relaxing night away from the noise and dust of the big city (www.doganbeyturizm.com). They serve a tasty breakfast and the price for one night is not bad at all, I believe the owner said 130 lira for an entire rustic cabin (unfortunately, we both forgot to take pictures of this wonderful hotel). 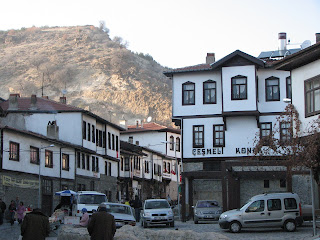 In addition to tasty breakfasts, Beypazari is nice to wander through. The traditional ottoman architecture is a relief to eyes injured by Ankara's bland architecture and the village people are friendly and welcoming. Sample some carrot juice and some carrot lokum (Turkish delight), check out the numerous silver shops, and take some pictures. Wander through the narrow alleyways where villagers hawk their wares from table clothes and scarves to any type of household good that you can imagine - and the prices are cheap! Yadi and I love it there and you probably will too! 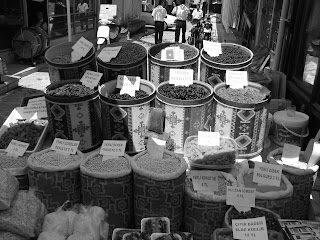 Posted by Alexandria at 4:59 PM No comments:

Reflections on my Egyptian travels

They came towards us like zombies drawn to fresh meat, attracted by the sound of our voices and the slamming of the car door. There must have been about 20 of them surrounding us, jostling us. “Take a camel ride”, “Horse drawn carriage, very fun!”, “Guided tour”, “Sphinx too far to walk”. Fighting our way through the melee of hustlers, we were finally able to gaze upon the magnificence of the Giza pyramids… until they were once again blocked by a grumpy looking camel and an animated driver, “Get on, get on! Cheap prices!”  Choosing to walk rather than succumb to the pressure of the camel drivers and horse drawn carriage owners, we set out, trying to make the best of the pyramids despite the constant onslaught of cat calls, invitations and warnings that it was impossible to walk to the Sphinx. Within 10 minutes we were in sight of the Sphinx and had escaped the hoards of salespeople. 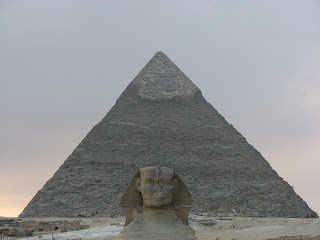 Although Egypt offers fantastic attractions and a rich history, these attractions have been ruined by an overabundance of visitors and an overreliance on tourist dollars. In the week that I was there, my friend and I were approached constantly with demands for money, trinkets for sale and horse drawn carriages to ride. The persistence of these money makers and their constant haranguing made the Egyptian experience border line unpleasant. Offering to take our picture, the tourist police would then stick out his hand and demand a tip. Want a nice place to photograph the temple in Luxor? The security guard will point it out to you for a fee. Take a horse drawn carriage ride quoted at 8 pounds… only to find out that the driver expects 8 British pounds (which we did not pay, leaving him with a fistful of Egyptian pounds and his curses and threats to call the police ringing in our ears). The fear of being ripped off and our subsequent distrust of everyone around us cast a dark glow over our holiday. Greeted with a cheerful “Hello!” on the street, we would avert our eyes, lower our heads and walk quickly onwards. 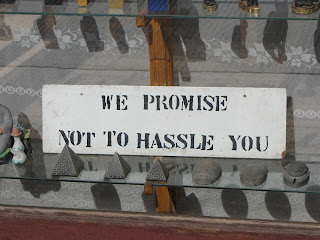 While in Luxor we decided to go camel riding – an uncomfortable experience to say the least. After finally descending from the camel, we were urged to tip our guides. After being tipped individually, the guides then compared tips and came after us, complaining that one had received more than the other. A friend once told me that she paid to get up on the camel and was then forced to pay more to get down (camels are tall). Others have reported paying to get their cameras back from a man who offered to take their picture. Beware of the owner of the donkey “Ramses II” who will pick you up and force you on to Ramses’ back and then expect a large tip for his actions (although, the tale of our forced ride on Ramses II and the subsequent pictures make for a good laugh).
All this being said, we did meet some wonderful and helpful people, yet my personal feeling in the tourist areas was that I couldn’t trust anyone. Everyone wanted something. I don’t think that I will go back to Egypt, nor will I recommend it to anyone. I loved the sights, the pyramids, the temples but I couldn’t handle the harassment. 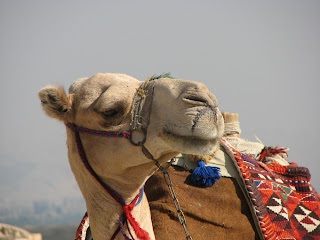 Posted by Alexandria at 4:24 PM No comments:

Alexandria
Avid traveller, devourer of books,lover of smushed faced dogs, a planner, a dreamer, a cook in the making.